Greetings once more fellow Wargamers and Hobbyists, to the place I call...here. Today, I thought I'd show you my scrap book, if you are amenable. This is not a book in the traditional sense, more a room which is filled with all manner of images and trinkets which have spawned the seed of the hint of the whisper of an idea in the darkest most cobweb ridden recesses of my brain.

This week, the legend that is Jon of The Combat Workshop, and architect of the gathered magnificence that is the Sprue Cutters Union (#spruecutters), has asked a question about where it all comes from. What makes our pistons fire and atoms split...

- Where does the inspiration for your next build come from? -


Now I am sure that we will get a wonderful array of outward pointing and sometimes overlapping thoughts from the Union Members on this topic, because our experiences and interests are so varied, yet at the same time similar. So what does this question conjure up for me?

Well my friends, though I have said it many (many) times before, and will sure say it again before the timer ticks it's last tock and spills its last grain of sand, I am a Wargamer, which means that I play tabletop wargames with toy soldiers. It also means that I am a member of several online forums (May I recommend 'Astronomican', and also encourage you to join the 'Garagehammer' forum), and a local wargaming club: MAD Wargames Club - see my MAD Wargames tab for more info. In addition to being a part of the communities associated with the forums and the club, I also read White Dwarf magazine, Games Workshop's monthly advertising publication which is fluffed out with the odd gaming article.

So: Online forums (and blogs), 'The Club', and White Dwarf magazine...there is one more source that have taken inspiration from recently, and that is Wargaming Podcasts. I currently listen to sixteen different podcasts covering Warhammer 40,000, Warhammer Fantasy and Blood Bowl, and this is yet another source of ideas, news about what is going on in the wider wargaming community, and typically good entertainment.

So what is it about these sources that inspires me to pick up a paint brush, or reach for my wallet, or pen for that matter? Writing background material for an army or campaign is a serious business too!

Well, typically, the projects I undertake are driven by whichever army happens to be my 'flavour of the month', and which army that turns out to be at any one moment is influenced by several factors. It could be that one of the armies I collect has just had a big new release, like a new rule book or wave of models, which has been showcased in White Dwarf, and along with the battle report that always accompanies such releases, this can often inspire me to break the mystical seals on the stasis chamber of that particular army. That army then becomes the focus of my modelling and painting time, as I update models or units and endeavour to field as many painted models as I can. 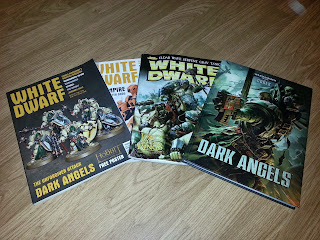 Alternatively, it might be that I have arranged to play games at the club against a particular army, and want to try playing against them with an army I haven't used for a while, or I could be asked to field an army that my opponent hasn't faced before, which then drags that army into the spotlight for a spell. Our current Blood Bowl league is a good example of 'Club driven hobby', because it required me to dig out my Blood Bowl models, strip my Undead team (Egdenberg Undertakers), and re-paint the whole team. 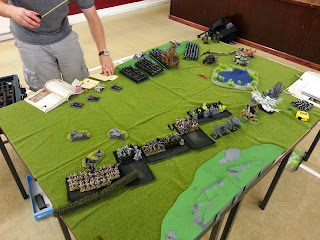 Online forums inspire me to pick a painting project and stick to it, thanks to the encouragement I get from seeing other people's WIP's (work in progress), and challenges like the Painting Survivor Series I look after on the Astronomican forum, which is a friendly 'Iron Man' style painting contest to see who can keep painting for the most days consistently before their nerves fray and their hands cramp up. A little competition is great for inspiration and motivation. Seeing other people's work and what they can achieve online is always good for inspiration, as well as for sharing tips and techniques with fellow hobbyists, all of which helps to get the creative juices flowing. 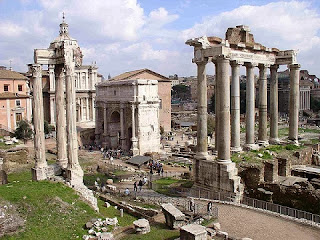 Finally, we come to podcasts. I find that podcasts are a great way of staying in touch with the hobby and all the news and rumours, without having to actually do anything, because I can listen while I paint, or while I'm driving.

A good example of recent inspiration I took from a podcast is my current mission to break out my Bretonnians and order myself some Foot and Mounted Sergeants from Fireforge Miniatures, which Wayne Kemp of the HeelanHammer podcast talked about as an alternative model for use as Men at Arms and Mounted Yeomen for his Bretonnians.

I have never owned any Yeomen (though have often thought about getting some), and two thirds of my Men at Arms were represented by plastic Empire State Troops, because at the time I was building the army, the proper Men at Arms were all in metal, and the plastic Empire models were a far cheaper alternative. After taking a look at the Fireforge models on Wayne's Twitter feed and on their website, I found that indeed they were a worthy alternative, so out go the State Troops to a gent who saw them for the bargain that they were, and at the beginning of the new year, I will be assembling my shiny new Fireforge Sergeants. 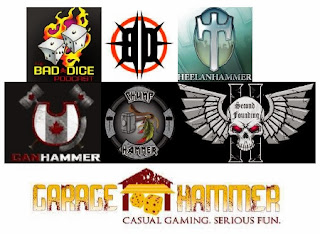 Here is a sample of the podcasts I listen to. I also enjoy Hitting On 3's, Kiwi Hammer, SkaredCast, A Tale of Four Geeks, The 11th Company, The Dwellers Below, The Independent Characters, The Watchtower and Three Die Block - all are well worth checking out. Those with reason to warn you about language content will let you know in the intro...


So, as you can see, as there are many facets to the wargaming hobby, each of which have their ways of providing inspiration for a project, whether that project is a new set of models, painting models I already own that are crying out for some attention, or completely revamping a collection. There is always something that needs to be done, and all I have to do is decide what the next thing will be...all it needs is a little inspiration.

So, what will you be inspired by today...?

If you would like to read more posts on this topic, I encourage you to check out the links below, which will take you to the blogs of other Union Members, all of whom are worthy hobbyists and bloggers themselves. If you fancy yourself as a Sprue Cutter, then look here for details of how to become a part of this worthwhile endeavour. All you need is a blog, and a passion for miniature modelling. Go on, inspire us.

Posted by Eternal Wargamer at 22:56