Ok Wargamers and Hobbyists, here is a quick step by step showing you how I do the basing on my gaming minatures. I find that this method is quick, and works just as well for big gribbly monsters and smaller individual troopers. It also works fine for both my Fantasy models and my 40K models. This is gonna be real quick...

The base on this Dark Angels Marine (First Legion for the win!) has had a layer of sand glued to it using PVA glue - just plain old sand, though it looks better if you mix a hand full of gravel into your sand container to give some texture variety. After the glue has dried, the base has then been painted with a dark brown. I used to use Games Workshop's 'Scorched Brown' until I realised how much of it I was using for basing, now I use a cheapo dark brown emulsion from Wilkinsons called 'Java Bean'. 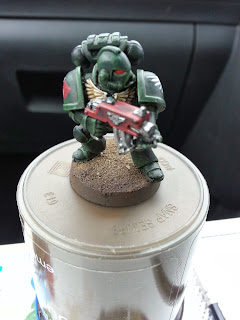 After the brown has had plenty of time to dry, the base of the model below has been given what I call a 'heavy drybrush' of GW's Vomit Brown, which is just a pale brown that has a touch of yellow or orange to it.﻿ 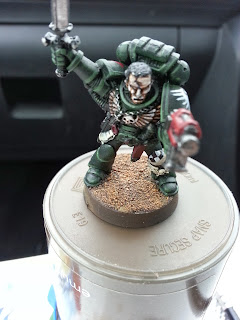 Next, the base has been given a more measured drybrush with a pale bone colour - in this case, GW's Bleached Bone. This adds a third colour to the base, and picks out all the little stones and bits and pieces, giving it some depth and texture.﻿ 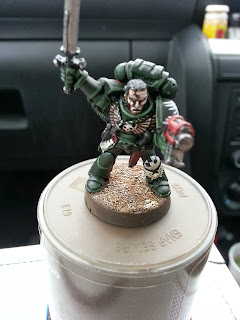 Finally, when enough men have died...hang on, that's not right. Finally, I apply a scattering of static grass, This is the short stuff, which has a mixture of grass colours in it to stop it looking like a flat artificial colour.﻿ 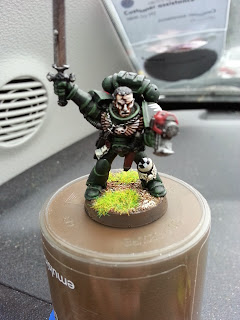 Really, that's it. A couple of people have commented on my basing, and rather than let people think it was in any way difficult, I thought I'd just post up a quick guide to how it's done. Nothing spectacular, but it's quick and easy and looks alright, whether it's a model with a big base or a small base, and whether there is just a single mini or an army. With Warhammer Fantasy regiments, where the models are all lined up in ranks so you can't see the base edges so much, it works even better. I have often thought that just a little bit of extra work on the bases can make a world of difference, and make a model really look finished. That's it.

Thanks for reading.﻿
﻿
Posted by Eternal Wargamer at 10:52