Greetings wargamers and hobbyists. To borrow a segment title from HeelanHammer, 'Zis is ze war room'... 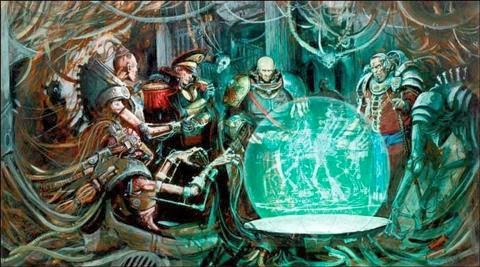 Forging the narrative is a phrase we are hearing quite a bit these days, printed in magazines, frolicking online, and uttered by show hosts on various podcasts. Though this is a phrase which first saw the light of day in the Warhammer 40,000 6th Edition Rulebook, I think that the phrase has merit across any war game system.

At the end of the day, wargames are not just a game with rules to be played and either won or lost, they are a story, and the playing of the game tells the story. By our decisions as commanders, be they sound or otherwise, we allow the story to unfold on the tabletop. Simple wins and losses become stupendous victories and crushing defeats. The game takes on a character and an aura that surpasses anything we might experience playing more light hearted games.

Recently I have been thinking more about campaigns, what they are, what they should be, what they could be, and how they can be successful. A fantastic campaign might be the holy grail of wargaming for many people, but it can also be a difficult thing to achieve. The pot of gold at the end of the rainbow, if you will. For myself, I think that the single most important consideration is how you can keep all the participants engaged and enthused, and if you can achieve this, it's probably because you've got enough of the other things on the money. The interest in the campaign is the measuring stick you use to determine how well you are running the campaign. That's not to say that what you're doing isn't good, just that it's not pushing the buttons of enough of the players. What one player might think is amazing, others might not.

The purpose of all this pondering and postulation is to analyse my own ability to run a successful campaign, and what ideas I can come up with to support it and make it interesting, because my favourite kind of campaign is one with a strong story to back it up (rather than one that just pushes pieces around a map and adds up area control points), a campaign that epitomises ‘Forging the Narrative’.

Any of you who have been able to put up with me for a while may remember a couple of posts about the Eye of Morrslieb narrative campaign I started a few months ago at my local group. It's fair to say that this was not the great success I envisaged, though at the same time few events at our club remain flavour of the month for more than, well, about a month, without significant effort. I think the idea and the story were sound, I just couldn't make them work in practice, especially not with eight players.

'Bitten off more than you can chew' might be an apt phrase. I am wondering whether any future events should be based around a small but dedicated core of players, with in-built capacity to allow additional players to join and leave for one off games as they please...

This is the first of what will undoubtedly become a reoccurring topic on the Eternal Wargamer, and for now I just want to talk a little about what I have noted as potentially the most important aspects of creating and running a campaign. This is as much a journey of discovery for me as it is any kind of advice for others wishing to tread the path. Learn from my mistakes I guess. It won't just be a description of a practical system for running the campaign, because there are plenty of those out there that don't need explanation from me. I will however be referring to the foundation that I intend to use, which is one of the systems found in The General's Compendium. What I will try to talk about, the shadows I want to pin to the floor, are the additional elements that not only allow you to run a campaign, but to keep things flowing and keep people interested.

So, this post will just be my initial thoughts on what I think at this stage are the most important things to consider (to save it turning into a multi-page wall o' text):

To provide a setting and premise for a campaign that players actually want to be part of, because it is engaging, exciting and is challenging for all the participants.


Like I said, these are the things I will be thinking about over the next week or so, before laying the basic structure of a campaign and checking that the foundation is sound by bouncing it off a couple of the players at the club (and you guys of course - any feedback is welcome).

Let me know what your thoughts are. Are there any other key things you think I (or anyone else) should look out for when planning a campaign?

Until next time, thanks for reading...

Posted by Eternal Wargamer at 00:32