Greetings Wargamers and Hobbyists, and welcome once again to my humble hearth. He we are for the Sprue Cutters Union (#spruecutters) topic number Seventeen...

This week, the Union has been asked to think about the amount of effort that we put into our modelling projects over the course of a year, bearing in mind the amount of hobby time each of us is actually able to spend while we shoe horn it in around all of our other 'real world' commitments, and consider...

- If you had the resources, would you attempt one HUGE project? -
My answer to this interesting question, speaking of course as a wargamer, is not immediately obvious. At the end of the day, I could spend a year working on just one army, pushing the painting, conversions, basing and centrepiece models until it was done. Heaven knows it would probably take that long to completely finish one of my many armies. Having said that though, if I were to dedicate a year's worth of hobby time and resource, I don't think this is what would immediately spring to mind. Painting gaming miniatures, rather than being one large project, is more like a succession of small projects - each army or detachment is a project, as is each squad, regiment or squadron, but then so is each and every individual model.
No. Painting gaming miniatures is part of a never ending cycle of birth and renewal, and adding new miniatures as new releases arrive, rules change and tastes alter. ask any dedicated wargamer, especially the veterans, and they will probably all agree that an army is never really finished. I think instead that if I were to dedicate a year to a single project with the intention of that project being thoroughly and officially complete at the end of that year, it would be another 'Holy Grail' project for all wargamers: A purpose built, themed and jaw-droppingly impressive battlefield!
Now, I do have a simple battlefield set up at home, which is comprised of a six foot by four foot grass gaming mat glued down onto three sections of plasterboard for rigidity and easy of storage, and I have also collected sufficient terrain to play all of the games I have models for, be they Warhammer Fantasy buildings, towers and woods, to bunkers, silos and barricades for Warhammer 40,000 and Necromunda, and even asteroid belts and planets for games of Battlefleet Gothic,which are played on the reverse side of the plasterboard which I have painted as a black star field for those games of futuristic space naval combat. These however, though they are perfectly sufficient to allow me to play games across, are not the kind of battlefield project I am talking about.
This week, at least partly due to time constraints brought about by juggling too many projects this week, I am going to cease my otherwise interminable rambling, and let the pictures do the talking. Below are a number of pictures I have taken from various places, though mainly the Games Workshop website, which depict some of the incredible battlefields that have been created either for displays, or as functional but awe inspiring gaming tables for use at Warhammer World in Nottingham. Now this is what I am talking about. This is the single large project I would dedicate a year to...enjoy. 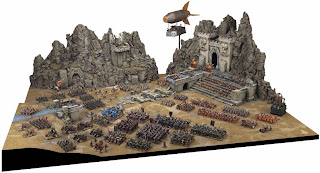 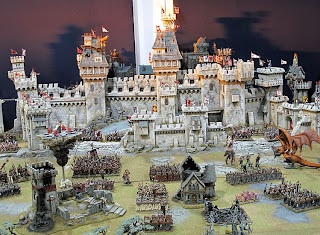 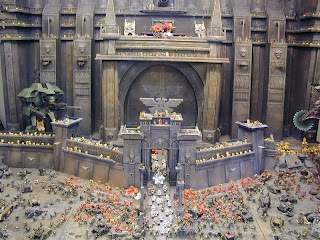 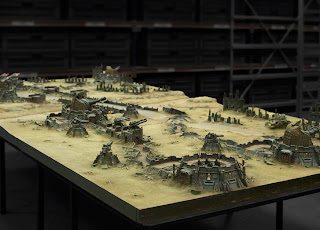 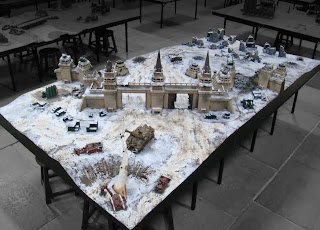 ﻿
If you would like to read other posts on this same topic from the views of other Union members, please check out the links below. In addition, if you fancy finding out more about joining the Union yourself, please look here for more details. All you need is a blog, and a passion for miniature modelling.
Yet Another Plastic Modeller
Mattblackgod's World
Fill n' Sand
Doog's Models
Migrant's Wanderings
Scale Model Workbench
and of course, the lynch pin of the bunch: The Combat Workshop
As always, thanks for reading.
﻿
Posted by Eternal Wargamer at 02:27