Greetings Wargamers and Hobbyists, and welcome to my 'secret planning room'. This is where I make all my secret hobby related purchasing plans, and is perfectly safe for discussion of such plans of hobby expenditure, because my Eternal Wife, doesn't read my blog. I think. I guess I'll find out pretty quick if it turns out she does...don't tell her, will you?

Now just a quick word about Union post #19, which was all about the amazing purchases hobbyists managed to make on 'Black Friday'. You may have noticed (or not - it is still perfectly likely that no one reads this blog except for you), that I didn't write a post for #19 (the first I have missed since this endeavour was born), and this is simply because I didn't make any hobby related purchased as part of the Black Friday sales, because (apart from online from the US) we don't have Black Friday in the UK.

I did consider talking about the purchases I have made over the preceding weeks, or what I wanted to buy, but the post was intended to be about Black Friday deals, not general purchases, and talking about what I wanted to obtain during the festive season would have left me rather stuck for something to say this week, wouldn't it?

Now this question relates specifically to what you would like to be able to add to your collection one way or another at the close of the coming festive season. I can only really answer this question properly if I answer it as a wargamer, rather than only as a modeller, to that's what I am going to do.

Well, four items...let me see now. Well, I would be surprised if hobbyists and gamers the world over haven't got a clear as crystal idea in mind of what they would love to receive as gifts from family and friends over the Christmas period, and I am no different. My plans also include my Birthday, which falls in early January, and typically these days a chunk of the gifts I receive are made of paper, have pictures of famous people printed on them, and can be traded for toys!

The plans I have in mind go like this: While listening to a podcast recently (HeelanHammer to be precise), I heard Wayne Kemp talking about the new Fireforge Sergeants models, which would be perfect for using as part of my Bretonnian Warhammer army as Men at Arms, the downtrodden and dishevelled peasant levies that march into battle alongside their noble masters. A number of other blogs have done reviews on these great (and relatively inexpensive compared to GW) models, so I won't blather on about them too much here until I come to starting work on them.

But there's a start. Number 1 on my Wish List is a box of the Fireforge Foot Sergeants. 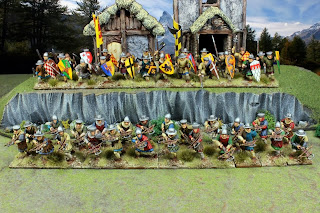 ﻿
Number two on my list compliments my number one choice, and is a box of the equally stunning Fireforge Mounted Sergeants, which will make perfect Mounted Yeomen for my Bretonnians, outriders and scouts that ride out ahead of the main knightly army, and harry the flanks of the enemy in battle. Not to mention being shoved 'under the bus' when necessary to disrupt an enemy advance.

Number three and number four on my Wish List are books, and this is where I slide my bar along a bit so it sits about half way between modelling and gaming. There are actually more books than this on my 'hit list' for the coming weeks, but I don't really count books that contain updated army rules because they are something of a given rather than an 'ooo! I'd really love to own that book! That would make my games really exciting!'

The first book I would like to see in my stocking is a new expansion for Warhammer 40,000, one of two out this month. The book is called Escalation, and deals with using 'Lord of War' models that are typically only seen in the huge and massively time consuming Apocalypse games, and putting them in your regular games of 40K. Being as I own a Shadowsword Super Heavy Battle Tank, I would like this book to allow me to blast Xenos and Traitor units off the table with the formidable 'Volcano Cannon'. The other expansion for 40K that is due out is for using vast and beweaponed fortifications, but seeing as I don't own any of the specific fortifications the book covers, that's a book for the future. On the modelling side though, being able to field my Shadowsword means I finally have to paint it, so watch this space... 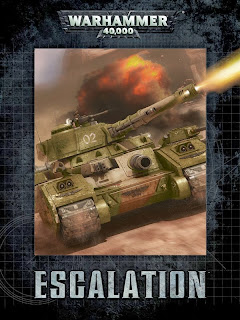 And finally, a book that covers two things very close to my antiquated clockwork wargaming heart: Sigmar's Blood. Sigmar’s Blood is a campaign supplement for Warhammer based on the war between the forces of The Empire, led by Volkmar the Grim, and those of the Vampire Counts, led by Mannfred von Carstein. I am a life long (maybe life isn't the most appropriate word?) Vampire Counts players and lover of campaigns, so this book is right up my street. Here's to some interesting games for the new year. This will be great motivation to crack on with painting my Vampire Counts models, of which there are a great many. 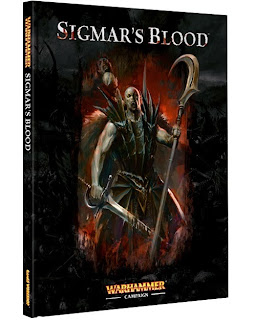 There we are, my four 'Wish List' items for this festive season (and subsequent birthday), and if I find that by the middle of January I am busy assembling Fireforge miniatures and planning the destruction of the Empire, I will be a contented gamer...

If you would like to read more posts on this topic, then I invite you to check out the links below to the blogs of other Union members. The Union is made up of a varied bunch of hobbyists and modellers with their own individual take on our shared passion. If you would like to find out more about joining the Union (which now boasts twenty seven Members!) yourself, please look here. All you need is a blog, and a wish to share your thoughts on miniature modelling.

As more members post their articles, the links will appear in the Topic Hub on Jon B's Combat Workshop blog.