Greetings Wargamers and Hobbyists. Here we are at the brink of a whole new year; but what has the old year taught me, as it limps wounded into the night?

I think that this year has been one of great change in our hobby, and much of that change at least in my neck of the woods has been a result of the metamorphosis of the Warhammer game into Age of Sigmar, which although it retains much of the branding and model range of Warhammer (The Game of Fantasy Battles), the game rules and the setting are almost unrecognisable. This wasn’t a revamp or new edition of the established game, it was an fundamental re-imagining, like a wriggling Nurgle blessed maggot into a bloated Plague Drone.

I won’t say too much about the change over from WFB to AoS, because it has already been said, and at great length, by a great many people. We have talked about the few core rules, the boat loads of Warscrolls, the endless re-basing and the various pros and cons of the new game. What the change did do for me was open the door to new gaming experiences. In the past year I have ventured beyond the once adamant borders of the Games Workshop realms into the wider gaming world beyond.

I have taken an interest in Mantic’s Kings of War game, and played it using the free rules, with plans to pick up the rulebook proper, especially now that they have released army lists to support those collections escaping the Old World. I have also backed a Kickstarter for Dropfleet Commander, which is something else that is new to me, but I am a sucker for cool space ship games. Also, there now resides on my shelf a copy of the Frostgrave rulebook, for which I intend to gather a Warband at the start of the new year – once I can lay my smoking paint brush to one side and take a break from painting for some assembly. 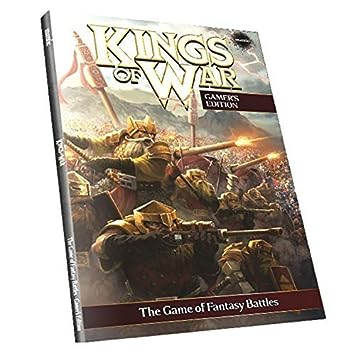 More than that, I have spent time reinvigorating older games and models in my collection, which I thought at various points may never see the light of day or the thrill of battle again. I have played Man O’ War (!), I have re-gathered my Warhammer Quest set, now ready to venture into the darkness below with my son, and there are rumours of unrest in the Underhive of Necromunda. Another spaceship game, Battlefleet Gothic, is one I intend to get playing again very soon. As I said in my post only last week, I have organised my models, gathered the accoutrements of gaming and generated ship damage record cards for every vessel in my collection.

So what else have I done in the hobby this year? Well I did get back to gaming, after getting in only a couple of games until about October, when my wife’s Thursday night dance class moved to Wednesdays and allowed me to get back to the club and play, which was a joy indeed! I also managed to get a fair bit of painting done.

My goal (for those who remember to this time last year and my 2015 Hobby Resolution), was to get 250 miniatures painted to a tabletop standard (and I know this means different things to different people), and if I hadn’t been able to return to club gaming in the latter part of the year, I would have beaten that goal comfortably, however as hobby time began to once more be taken up with list building and rules refreshers, my total at the end of the year stands at 219 completed miniatures, with another 15 only a few hours away from being done. I may have fallen short of my target, but having painted 377% of what I managed in 2014, I think I can live with that. I think next year the target will be a more modest 200.

The other thing I have done this year is to blog more, on this site, guesting over on Creative Twilight, and also taking part in a revived Sprue Cutter’s Union, which is going great guns, although we have taken a break for the festive season. Long may it continue.

I have done a great many things in the hobby this year, and expanded my gaming horizons, but what did I learn? I think I learned that the hobby is what we make it. Even when presented with what seems like too great a challenge to overcome, and our gaming world is turned upside and inside out, with a little time and effort we can achieve anything, make any game work, make any event fun.

There is a whole world of games out there my friends. Go forth and forge your own narrative. May I wish you all a fun, peaceful and prosperous New Year. Let’s make 2016 a good year. #EnjoyAllTheGames


Happy New Year, and thanks for reading. Posted by Eternal Wargamer at 06:56