Greetings Wargamers and Hobbyists, to what in our neck of the woods is a rather gusty morning in the East Midlands. I'm late, I'm late, for a very important date...

Oh the irony. The November topic for the Sprue Cutters Union is a question about planning projects within our hobby, and as I probably consider this hobby blog an extension of my wider modelling and gaming hobby, the lateness of this post going up should speak for itself!

“Do you plan and prepare for every step of your
build’s process or do you wing it as you go?”


Well now, here we are on December 5th. The cut off for the topic submission should really have been the last day of November, so why am I bothering to write this at all after I have missed the date? There are a couple of reasons really. First, I want to support what I believe is a great project and community endeavour in the Sprue Cutters Union, and secondly, I am determined not to miss any posts since the return of the group project. It is a great driver for thinking about the hobby, and for making sure my blog doesn't go too long without some kind of offering to the hobby world. I am also hoping that Jon hasn't already typed up the November SCU roll call yet...

And what is the answer to this month's topic question? Here is the irony. I plan every project in some detail. I have to, because I am a wargamer. Let me explain. Anyone not versed in the world of miniature wargaming may well not be aware of how things work, but at least for the games I play, list building is an integral part of the hobby.

This is the bit where we decide which units we will include in a force for a game we are going to play, and this includes deciding what equipment a unit will go into battle with. This decision making process begins not at the point where we agree to fight a battle against our opponent, but way back before that, when our group of models are still on the sprue, or even still on the store web page. 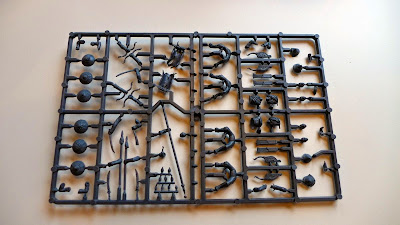 Although it is not always strictly applied (it pays to be accommodating in what is primarily a social hobby), it is a generally held standard to try and adhere to the rule of WYSIWYG in the world of miniature wargaming, which stands for 'What You See Is What You Get'. This simply means that the model you put on the table is equipped with the weapons and wargear that you have included in your 'army list'. This is because many units in many different games include options for different weapons, which determine what the capabilities of that unit are on the battlefield.

We want the model our opponent sees from across the table to represent the model in our list as accurately as possible, because this can affect their decision making process when they are planning how to tackle that unit. It is entirely likely that there are instances on gaming tables across the globe where a discussion has to be had at some stage in a game to clarify what a model is and what it is equipped with, because a different decision would have been taken by an opposing player had the model been 'WYSIWYG'.

In practice, this means that we have to read and understand what the model can do in game terms, and the role we want it to fill in the army before we even cut the first sprue, so in this respect there is certainly planning required for every build, apart from the odd one here and there were a unit doesn't have a diverse array of weapons options and only has the one set up. Special or Unique units are an example of this, as they tend to represent a well know model or character in the game setting, and their equipment is pre-determined and does not vary. Other than that pretty much every model has options.

Now that we have laid out the planning that is required just to be able to build a unit, there is a further and slightly more advanced stage of planning that I have come to include in my model building as widely as I can, and it is something that tackles the question of what to when you need a model that you have built to perform a different role in a game.

You don't want to put a model on the table that doesn't represent the weapons you need the model to use in the game, but at the same time, the weapons you have built the model with are not suitable for dealing with the opponent in your planned game. Perhaps you need that tank that is set up for anti-armour duties to take on a close support role, providing a greater volume of fire to take on a horde of infantry models.

A powerful shot from a weapon like a Lascannon may vaporise one Ork Boy per turn, and you have three Lascannons on your Predator Annihilator, but that won't help when the enemy unit has thirty models, including a leader with a Power Klaw (a giant hydraulic can opener), and Rokkit Launchers that can punch through your armour. You really need Heavy Bolters or perhaps even Heavy Flamers to really spread out the anti-personnel goodness.

There are two options for using different weapons on a model. Number one is that you simply let you opponent know before the game begins that the model is armed with different weapons to those depicted, and generally this won't be frowned on too much, but the option I have come to prefer is option two: magnetise the kit.

Magnetising a model involves building magnets into some of the components (typically weapons), so that they are held in place by the magnets while playing, but can be swapped out for alternative parts for the next game.

When it works, this is a cool and beneficial technique, but if it is one you have never tried before, then it pays to do a little research before you try it. There are a few different kinds of magnets, but generally the the size and shape are more important than the type, and you also need to consider carefully where the magnets need to be placed, and how. Sometimes there isn't anywhere to fit the magnets on one part of the model - there is a big space where we wish the manufacturer had included a nice magnet shaped recess - and so we have to improvise and build in our own support for the magnet.

I won't go too deeply into the process for magnetising kits, because I have posted a 'beginners guide' based on my own experiences on this very blog. Suffice to say that Magnetising requires a fair amount of planning before you start the build, so you can be clear on which parts need magnets, what size and how many you need to use, how you will fit them, and which parts of the model can be assembled and glued. Click below to read more.

I could go on and talk about how sometimes we need to plan whether to paint certain parts of a model before we assemble it, because there are some places you just can't get a brush to once the model is glued together, and a half dozen other things as well, but I think that is quite enough to be going on with for this month.

There won't be another Sprue Cutters Union topic now until January, as we all take a break for Christmas, but I will surely be posting something else before the closing of the year, because I need to give you all an update on how far I got with my painting challenge for the year...

Until then, thanks for reading.

Posted by Eternal Wargamer at 00:10