Greetings wargamers, and welcome to my Antiquarium.

This is the place that my most ancient and venerable curios are stored, some of which are reduced these days to little more than whisps of vague memories in stoppered jars bearing peeling and faded labels. I am here because I am currently aspiring to become a part of the Sprue Cutters Union, a new and fantastic initiative launched by The Combat Workshop.

The first challenge laid down by the Union is to talk about the 'first solo model kit you ever built'. Simple enough introductory task? Perhaps...

The Union itself is a cracking idea, and will hopefully bring together modellers, painters and gamers with great and varied experiences, but all with a passion for collecting, assembling, converting and painting miniatures. Some members may be collectors of scale military model kits, others may be wargamers of one stripe or another. Still others may bring something else entirely to the table. As long as members actively participate, then what they bring to the discussion is of value.

My First Model. Now then, though I do have a pretty vibrant interest in military history (indeed, one of the most amazing books I own is a weighty tome called 'WWII - The Directory of Weapons'), my modelling and gaming interests have always been Games Workshop's varied range of tabletop (and even map based) games. Believe it or not, some of their games other than the big two (40K & Fantasy. I don't even count the The Lord of the Rings games) are pretty good, despite the lack of corporate support for them.

In this jar, the one with the label written on in crayon, we can see the first model kit I ever built, which was actually a WWI bi-plane, and was bought for me before I was even ten years old, but I can't say for sure that this was a solo project. I am certain it was a mess after being smothered in poly cement, and I am sure was never painted, so lets just confine that one to modelling heaven.

I did have to search this place quite thoroughly to find exactly which model was the first one I can honestly say was the first kit I completed unaided, and much as I was almost convinced it was a set of the RTB01 'Imperial Space Marines Squad', when I really wracked my noggin, I remembered; after buying my first ever issue of White Dwarf magazine (issue 160, in February 1993), the first set I ever bought was the 'Space Marine' boxed game... 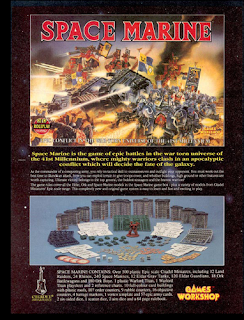 Now as anyone who has ever bought a Games Workshop boxed game will know, they typically come packed to the rafters with models, all needing to be cut from sprues and at the very least mounted on bases if not assembled from multiple components. This box contained not only several hundred 6mm Space Marines, Orks and Eldar infantry and armoured vehicles, it also contained numerous card and plastic city buildings to be popped out and put together, and a multi-part plastic Warlord Titan! It can be said that starting off with such a boxed set is something of a baptism of fire for a modeller or wargamer, or baptism of poly-cement might be more apt in this case.

I am miffed that I couldn't find a single decent picture of the box contents, but, beyond all hope, I managed to locate the Warlord Titan from the set. I don't have any of the other original models any longer, as I sold and traded away my collection for that game a couple of years ago in order to fund my Ogre Kingdoms army for Warhammer Fantasy, and I don't really know how I still come to have the Warlord, but with all this nostalgic talk of first models, I am glad that I do. Battered and extensively repaired it may be, but it is the first model I kit I ever assembled all by myself. 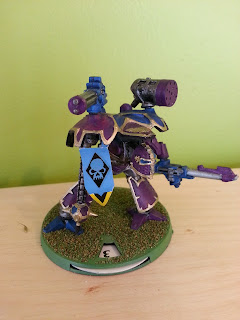 As always, thanks for reading...

In the interests of supporting the Sprue Cutters Union, I recommend checking out some of the following links for posts written by other members on this topic.

Doogs' Models
Yet another plastic modeller
The Combat Workshop

Thanks.
Posted by Eternal Wargamer at 11:05