Greetings fellow wargamers and hobbyists, and welcome once more during this festive season.

A few days ago, while listening to the Heelanhammer podcast, Wayne and Dan made a brief comment about planning to introduce their kids to the hobby of miniature wargaming, as I imagine many of us expect to do if we haven't done so already, and it made me realise two things.

Firstly, it brought me to the belief that our hobby - particularly where is concerns Games Workshop games - is now in a place it has never been in before. The second generation of players is coming through. The Old Guard (people like yours truly, and I guess the majority of hobbyists or gamers over 30 years old) are settling down and raising families of our own, and I expect most of us have plans for our own kids to benefit from our years of collecting and gaming experience. 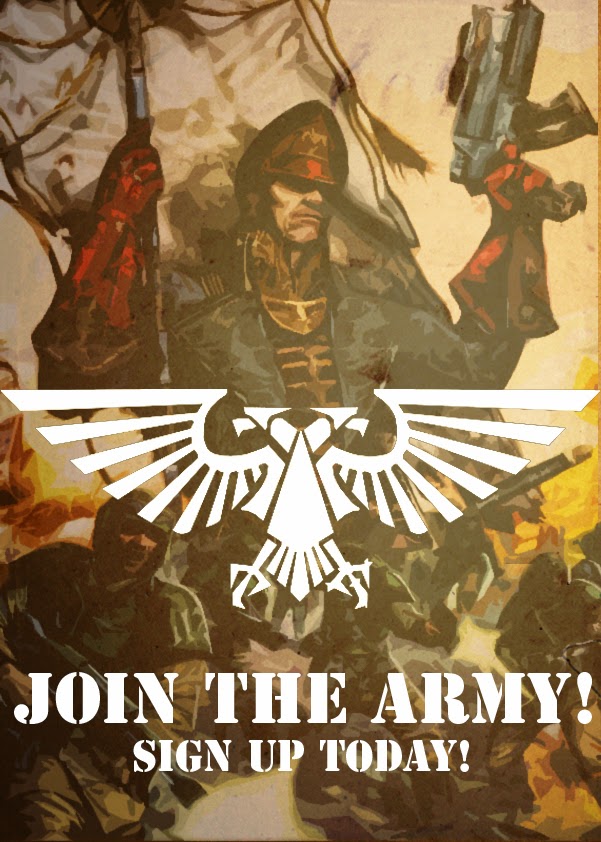 My son is not yet four, but already asks to play with 'daddy's toy soldiers'. This is to be expected I suppose, not only because lots of kids take an interested in what mummy and daddy are doing, but also because it's fairly typical for small boys to want to play with toy soldiers, tanks, knights and dragons at some stage. I'd like to think that little girls could also take just as keen an interest in these things if they lean in that direction. If I had a daughter I would be surprised if she didn't take an interest with all the gaming stuff I have laying around.

So this is all fairly obvious I guess, but it does lead me neatly onto my second point of discussion, which relates to Games Workshop's approach to sales.

The commonly held opinion seems to me to be that Games Workshop's target market, partcularly in their stores, is the 'new gamer', which the usual discussions indicate people believe is the 'young teenager'/pre-teen. A 'hook them while they're young' approach, if you will. Well I can't knock that approach in general I guess, it worked on me.

I have started to wonder now after listening to Dan and Wayne chatting whether that tried and tested approach is inherently flawed. When I think now about those new gamers Games Workshop are targetting, I have to wonder how many of those kids are the offspring of the first generation of gamers?

Ok, a quick sentence or two my thoughts about marketing practises that target children, for example adverts for toys during Saturday morning TV time. First off, I have to wonder about the ethical thinking behind bombarding small children with sparkly jingles and pictures of things they all of a sudden want, when they have no understanding of the way they are being manipulated or (more importantly), little understanding of the fact that toys and games are not paid for with fake money from their play shop.

Secondly, I will never understand why any company would target their marketing campaigns towards people WHO HAVE NO MONEY!!!

Typically, small children (in modern countries at any rate) don't have jobs, and at best have some small amount of 'pocket money' which they are paid by their parents in exchange for good behaviour, but even then they can't always spend it on whatever they want. 'Pester Power' should not be a thing! Parents should not be put in a position where they face arguments with the kids or capitulation in the face of screaming children that won't take no for an answer.
This is not a civilised state of affairs. I can't stand in my bosses office and demand a pay rise otherwise I'll scream and scream and scream until I am sick. It just isn't cricket.

Anyway, the point I wanted to make is that these days, how many of the 'new gamers' are really wide eyed and new to the world of hobby wargaming, and how many of them have parents with stern faces and Void Shielded wallets?

To paraphrase a line from Cuba Gooding Jnr, we know what it's all about: we've been to the puppet show and we've seen the strings. We also know what things cost, what perhaps is worth spending money on and what isn't and what is good value compared to what is not. We know about third party manufactured models and we know about discount retailers. We know about the second hand trade in miniatures. We know about ebay. Our eyes (for the most part) are wide open.

It's all well and good a company like Games Workshop building a strategy that focusses on new blood, but I have a feeling that a considerable amount of that new blood will become inaccessible unless we, the parents, the veterans, decide that the hobby is still a worthwhile, rewarding and financially justifiable pastime.

If however we become disillusioned and feel disconnected from what Games Workshop are doing with their games and miniatures, then we may well be making the decisions  about whether our kids get into what can easily become a huge investment in time and money, and critically (and very different from what was happening when I was starting out in the hobby), we would be making those decisions based on actual experience and first hand knowledge. Until now I can see a situation having existed where kids have talked their unknowing parents and grand parents into parting with cash based on their kids assurances that it's all very necessary.

In conclusion, I think that Games Workshop (and perhaps companies like them) need to pay just as much attention to what they need to do to keep the veterans engaged and happy with the state of play as they pay to ways of attracting the raw recruits, because the line between the two is only going to become greyer and greyer.

At the moment, but depending very heavily on what we see over the next few months, I think Games Workshop are doing what could be great things with the End Times series, but the long term impact of that and how it fits in with (or doesn't fit in with as the case may be) the 9th edition of Warhammer will put everyone in a very interesting place.

I think that Games Workshop should certainly think about their sales tactics; for example putting together bundles of models and actually giving some kind of discount for buying the bundle. Their quality may be second to none, but sometimes price wins out.

Anyway, these are my thoughts. If Games Workshop wants to be selling miniatures and games to my son in the years to come, they need to make sure I remain engaged in the hobby and supportive of my son's involvement with the company's products and methods.

Something for us all to think about in the years to come I think. Thanks for reading...
Posted by Eternal Wargamer at 07:48