Tales from the Battlefield... #1

Greetings Wargamers and Hobbyists and welcome to my Hall of Battles. The walls of this grand old room are hung with tapestries and paintings of the greatest victories of my armies. This new painting shows the Ogre Tyrant Grund Giantbreaker defeating the Lizardmen at the Battle of Mad Moor. Don't touch please; the paint is still wet...

A few weeks ago, after suffering yet another defeat at the hands of my arch nemesis, 'Dave', at our local club, I started a series called 'Where did it all go wrong?', which was meant to be about going over the detail of battles I had lost in an effort to better understand why and how, and hopefully avoid the same results in the future. Well, it worked, because I have played two games since, one each of 40K and one of Fantasy, and won them both...

Now we know of course that this fragile state of affairs can't possibly last, but while it does, I'm going to take the opportunity to talk about the high point of my last game in a new series I have dubbed 'Tales from the Battlefield'. Think of it as an arse covering excercise. Now, whether I win or lose a battle, I have a series to cover it.

So then, this first post in the series I will unofficially dub 'The Unstoppable Force vs The Immovable Object', which in this case is about the moment my Ogre Irongut unit (Including full command group, my Bruiser Battle Standard bearer and Grund Giantbreaker my Ogre Tyrant) move forward into a position to be charged by a block of Saurus Warriors.

First, a little scene setting. This game was 3500 points per side, Ogres and Nurgle Damons allied on one side vs Wood Elves and Lizardmen allied on the other. As this was a fairly large battle, we decided to just keep it simple and play it Pitched, particularly as we had a less experienced Fantasy player commanding the Wood Elves. Seeing as my Ironguts were being shot at by multiple units of Woodies, all with poisoned arrows, and the Guts were too far away to make a charge into the Saurus themselves, I moved them forward as far as I could to force the issue, and make the enemy either charge me or be charged themselves next turn.

At the same time as this showdown was being set up on one side of the field, on the other, a horde of Plague Bearers led by Epidimus was squaring off against a block of Temple Guard including a hero and Battle Standard. The chances were that these two combats would decide the outcome of the battle.

The next turn comes around, and units charge in on both sides of the field. Two decisive combats are initiated. My Ironguts may have been charged but they are big boys and can handle themselves I thought to myself. My only concern was causing enough damage to get through the Lizardmen's Steadfast and Cold Blooded. Then around comes the Magic phase. Our opponents roll well on the winds of magic. They cast Wissens Wildform on the Saurus block my Ironguts are facing. Not what I wanted, but we let it through, conserving our small dispel pool for countering Flesh to Stone, which my team mate was confident would destroy his Plague Bearers chances against the Temple Guard if it got through.

"Not the end of the world" says I, "not with my Tyrant in the fight and no enemy characters."
"Yeah," says my team mate, "You'll be fine. I'd be in real trouble if those Temple Guard got +2 toughness..."

Next they decide to cast Flesh to Stone. Not on the Temple Guard, but on the Saurus block my Ironguts were fighting. Our dispel roll was short. Damn.
Now you can imagine my consternation, and the feeling of guilt on the face of my team mate as I found my Tyrant's unit facing a unit of Saurus Warriors four ranks deep with Strength 5 and Toughness 7. With only the Wildform in play, they were wounding my Ironguts on 3's but being wounded on 3's in return, and I had my Tyrant and far more attacks. Now my models were wounding on 5's, even with Great Weapons, and going last to boot!

After some consideration about whether to activate the Dragonhide Banner this turn, or wait until next turn when Wildform would have ended making the Saurus easier to wound next turn (though it was a waste either way because the banner does far more for your unit the turn they charge, not when they receive a charge!), I decided to go for it. My logic was that I needed to do as much damage as possible in this first round just to make sure I was still there for a second! So the Dragonhide Banner kills 2 Saurus Warriors, but just as importantly, makes them strike last (simultaneous with my Ironguts) for the next two rounds of combat.

This is where I decided that I was very pleased with how I had equipped my Tyrant. Extra hand weapon, Greedy Fist magic item, and Giant Breaker Big Name, giving him six attacks at Strength 7. I would be relying on him to do well. As it turned out, with a few wounds caused on each side and all the bonuses, the fight was a draw. Thank heavens for the single wound caused by a Stomp attack!
Breathing a sigh of relief, but realising that both Wissens Wildform and Flesh to Stone would still be in play in the next round of combat, in our turn my Tyrant knocked back his Potion of Strength, boosting his Strength to a mighty 10! In addition, I managed to get a unit of six Bulls led by my Butcher into the flank of the Saurus block. Things were looking much rosier, but with the boosted Toughness of the Saurus still in play, this was certainly not a done deal.

At this point in the game and after something of a lacklustre start, my dice decided to wake up. Combat continued in our turn (after failing to boost the Strength of my Ironguts with a Maw spell), everybody got to make their attacks, starting (after Strength 5 Impact Hits from the Bulls) with my Tyrant, who smashed something like 4 or 5 Saurus with his Strength 10 attacks (I had been saving the Potion of Strength for the Treeman Ancient, but needs must). By the end of the round, with a worse than average showing from the Lizardmen, my two units had killed all but three models, and without Steadfast, not even being Cold Blooded could save the Toughness 7 Saurus from needing 'snake eyes' to stay in the fight.

The Saurus broke and ran, but with my dice having decided that their work was done, the Ironguts failed to catch them, falling short about 2", though they ran the fleeing unit down next turn and picked up the points (including for the Skink Priest that was in the unit), and for a total loss of about three Ironguts from my unit (of eight I started with).

There you have it. For a while it looked like my prize unit would be undone by a supercharged unit of Saurus Warriors, but they ground it out and Grund Giantbreaker got himself some Lizardskin boots. I should say that the Plague Bearer unit also defeated the (decidedly unenhanced) Temple Guard. You're welcome buddy!

That's it for this post, I hope it at least gave you an entertaining couple of minutes out of your day. Let's hope I lose another game soon so I can write something more constructive... 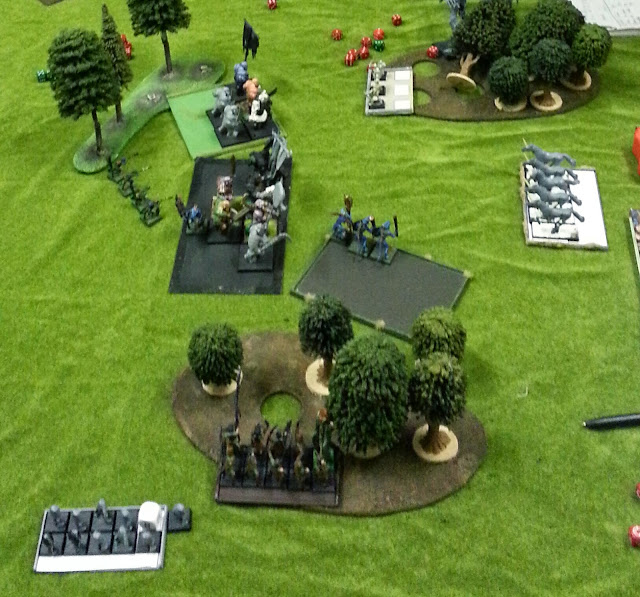 Posted by Eternal Wargamer at 11:51