The Next Big Games Workshop Question...

Greetings wargamers and hobbyists, and welcome to my post room. This of course is where all my gaming and modelling purchases arrive from far and wide, and I am pondering whether I am likely to have to knock out a wall and expand 'Goods in' into the walk-in weathering suite next door...

What I am talking about, which is of particular significance to players of Games Workshop games, is the recent release of the 7th Edition of the Warhammer 40,000 rules set. 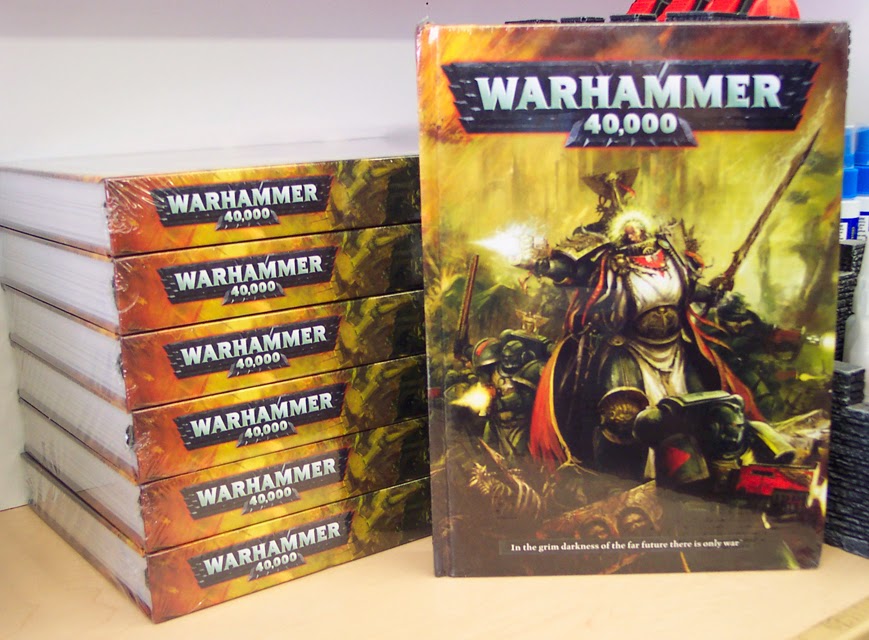 There are two conversations going on at the moment about the release of the new rules: one relating to the rules themselves, whether a change was necessary and whether the new rules set is better or worse than 6th edition, and the second relates to the timing of the release itself. This is because historically each new edition has come around roughly four to five years after the last, with a couple of exceptions; there was only a year between 1st and 2nd edition Warhammer Fantasy, and six years between 6th and 7th, while there was a six year gap between Rogue Trader (Warhammer 40,000 1st edition) and the 2nd edition of Warhammer 40,000.

The fact that 7th edition of 40K has come just two years after 6th has raised questions of some concern to gamers: did 7th edition come out so soon because 6th had a small number of issues that needed to be addressed, and so it was a one-off quick update? Did Games Workshop need a money spinner and so decided to produce a new rules set early? Finally and most significantly - is it because two years between editions will be the new norm? Given the phenomenal and comendable rate at which Games Workshop have been releasing Army and Codex books and supplememts over the last year or so, I am sure no one can doubt that they are capable of doing so.

Personally, I hope it was the first option. Though 6th edition was certainly not a 'bad' edition, there were some things that needed tweaking, and early signs are that 7th edition is a better rules set. However if it turns out that a new edition of the core rules for Games Workshop games will be released every two years for both of their signature games, then I think we may well see the end of that special breed of multi-army players, of which I am one.

I play five armies in Fantasy and six in 40K, and I think that players owning and playing more than just one army is probably pretty common, but with the rate at which Army and Codex books have been coming out, I am sure we can all agree that keeping up has become rather draining on the old bank balance, because it's not just the books, it's the supplements and new models too. While I think that the rapid release schedule is better than the glacial pace of releases were used to have, it has been bordering on too fast, and has probably crossed that line a few times as well.

For it to even be worth updating a book for an army, there will be changes to rules, units, options and list building possibilities, not to mention new models, and all of this means it can take weeks or even months to really get used to a new Army Book or Codex, without even considering supplements like Escalation and Stronghold Assault. When we factor in a change in the core rules every two years, I feel it can become very difficult to maintain more than a handful of different armies to any real depth of familiarity and knowledge, and so players who own as many armies as I do are more likely to concentrate on a smaller set of armies, and might leave other armies gathering dust on the shelf because they simply don't think they'll get around to using them before the next edition of the game is due out.

My concerns could prove to be unfounded, even if we do end up with a new major rules set every two years. Perhaps I'm just used to only having to spend £50 on a new Rulebook twice or three times a decade instead of double that. I guess only time will tell on that score. Maybe most people only actually have two or three armies and not eleven like me...

So, the Big Question is 'how frequently are we going to see a new edition of a major game from Games Workshop in future?' The answer impacts both how long we have to get used to and actually play an edition, and the practical value of each new rulebook we buy.

What do yo think the answer will be?

Me? Like I said, I hope 7th edition is a blip, and we will be back to 4-5 years between rules sets. I think that Games Workshop would spend their time and effort more productively going back to and reinvigorating their Specilalist Games Range, maybe release some new campaign supplements for all their games, hell, why not a Global Campaign or an entirely new race for 40K or Fantasy? All of these things would be preferable to a new edition of 40K or Fantasy in half the time we have become used to, especially if that also means new army books and codexes in half the the time as well, that really would make multiple armies unmanageable, and result in a reduction in my overall spend with Games Workshop, not an increase.

As always, thanks for reading...
Posted by Eternal Wargamer at 23:08